Living in Honduras and Guatemala is sometimes hard, mostly fun but never boring. Here some of my musings on life in this colourful part of the world where you can always expect the unexpected. Hence Serendipity, the gift of finding without seeking…

Living in the Most Dangerous Country in the World


Every day I wake up, shivering with fear, hoping I’ll make it to see the light of another day here in Honduras. I live behind doors enforced with triple bolt locks and I barely dare to go out on the street. I trust no one, I never go out at night, instead I lock myself up, turning up the volume of my TV to drown out the sound of gunshots.

If that’s what you want to hear, there you have it.
But the truth is quite different.

I don’t deny there is a serious problem with violence in Honduras. A huge problem. A problem so big, it is hard to imagine there is a solution to it, and even if the situation would better, it will take generations to get over the trauma of it.

The problem with the violence in Honduras, as in many other countries, is that there is not just one cause for it. Violence is deeply rooted in Honduran society, caused by corruption, lawlessness, lack of justice, lack of education for that matter, poverty, narco traffic, gangs, hopelessness, all of which lead to a vicious circle of more resentfulness, hate, vengeance, frustration and loss of morals. And the fact that Honduras is constantly in the news as being the most violent country in the world doesn’t help at all. Quite the contrary.

I live in Copán Ruinas, a quiet town in the west of Honduras that heavily depends on tourism. Since a year or so, we’ve all seen a gigantic drop in the number of visitors and when you ask tour operators or tourists, the answer is that Honduras is considered too dangerous to visit. The fact that nearby Antigua Guatemala and even neighbouring countries as Nicaragua and El Salvador are doing blooming business, proves it. But is Honduras really that dangerous for tourists?
I say it’s not.

First of all, let’s look at the numbers. It is now common knowledge that Honduras has the highest murder rate per capita in the world. But, just as in Mexico, that number is closely connected to gang activity, drug trafficking and mostly takes place in certain areas in the big cities. Places that tourists never visit. If you’d discount the number of deaths in certain neighbourhoods, the national average would be much lower.

I won’t deny that there haven’t been incidents in the past, but overall, the violence is not directed to tourists and the main tourist destinations are considered to be pretty quiet and safe. I can’t find any data on it, but if I hear from tourists that they were assaulted in their hotel or on the street, pick-pocketed or molested, it usually happened in Guatemala.

I can’t guarantee a tourist a risk free trip through Honduras, but I think that the dangers are highly overrated. You know a dangerous city for tourists??? Amsterdam! I recently visited my hometown, and talk out dangers! Not so much violent assaults, but deathly incidents nonetheless. Every year an astounding number of tourists die because they ride a bicycle (often for the first time in their lives) in the centre of town without understanding the unwritten rules of survival. They take the silent but oh so big and hard trams for granted while crossing the street without looking left or right. Each year, about thirty people drown in the famous canals, many of them (drunken) tourists who fall in when urinating, unable to climb back up the steep walls. And not to mention the number of people (I think it was three last year) of tourists who underestimate the power of Dutch marihuana and think they can fly out of a window, just like that. But those victims never show up in lists with numbers that show how dangerous Amsterdam can be.

The “Honduras = dangerous” slogan has become a bit of a hype and is being repeated time after time for no apparent reason, and without any effort on behalf of the Honduran ministry of tourism to prove the opposite. And that’s a pity, because Honduras is a country of an incredible natural beauty with great archaeological sites and terrific tropical islands, just to name a few attractions. Yes, Honduras has its problems, but so do other countries in Central America, as well as the rest of the world. The world we live in is not becoming a safer place, and Honduras is no exception.

To wrap things up, what I mean to say is that numbers are relative and that you shouldn’t believe everything you hear. My roommate is from Chicago and says she hears more gun shots outside her apartment there, than in Copán. I can tell you from personal experience that Copán is a great place to live or to visit and, relatively safe. Relatively, because a lot depends on your own behaviour.
And just to speak for this beloved town I’m luckily enough to live in: please come and visit Copán Ruinas! And not just because we need you! The archaeological site is breathtaking, the town itself is charming and fun and there’s tons to do: hiking, horseback riding, visiting the bird park or coffee farms. And yes, I do feel completely safe here. I go out at night, I hike through the mountains, I do whatever I like. Heck, with this heat I even sleep with my windows and doors wide open. But that’s something I maybe shouldn’t share on the internet.

Bottom line, come and visit Honduras. It’s worth it! 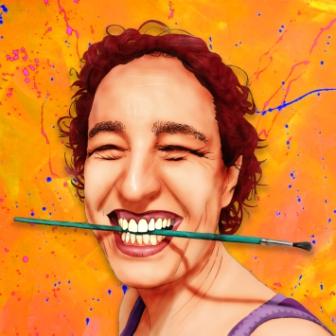 Carin Steen is an artist and designer. Originally from Amsterdam, Holland, she lived for over two decades in Honduras and Guatemala. Carin currently resides in Asturias, Spain, where she continues to paint, from small portraits to entire murals.